Slope Ball is a fun running game for singleplayer. Your task is to jump over the obstacles and reach the destination to move on to the next level. 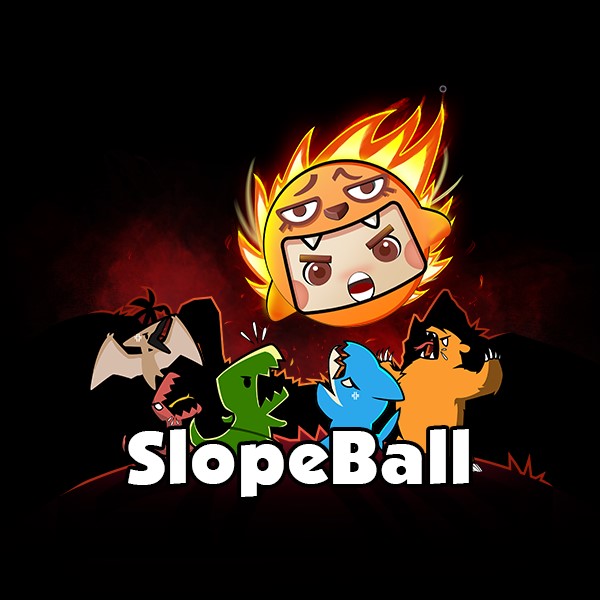 In this arcade game, your character will have different shapes with special skills such as a cube, ball or UFO.

Use the spacebar, up arrow key or left mouse button to jump or fly. With just one touch, you have to try to navigate your character through the obstacles. The goal is to go through all the portals. The obstacles on the track are just walls and traps. However, winning is never easy. You touch them, you lose. The race will start again at the nearest checkpoint you passed. Don't forget to collect all 3 stars on the track. A glorious victory is when you have all 3 stars.

When overcoming all the obstacles, the glowing wall is where you need to go. The game now shows your basic stats in the race. Pay attention to the number of tries, the number of jumps and the total playing time. Don't forget to improve it well on the next lap.

Slope Ball's map has 5 locations with 11 exciting laps. Your mission is to fight to rescue the mascots of these locations. Now, with Slope Ball, you will become the saviour of T-Rex Tyrannosaurus, Giant Snake Titanoboa, Flying Monster Quetzalcoatlus, Ferocious Bear Megatherium and even the Shark Megalodon. Of course, being a saviour is not easy.

On the track of Slope Ball, there are countless items waiting for you. Try to achieve them to have special skills for your character. At the same time, the portal also allows you to change your character. Remember, each character has different special skills. So this is where you can find your own favourite characters.

However, this game is not so simple. Items on the track also carry certain dangers. Your job is to decide whether to use them or ignore them to ensure your safety. Make a decision decisively and quickly. Your character never stops. Fortunately, Slope Ball has provided you with a hint with a symbol placed above each item. The arrow symbol suggests you use the item. You need to stay away from items marked with an X. Those items are essential traps waiting for you.

With Slope Ball, you will be acting as a ball with many different shapes. The funny story is that when you play the role of a ball, you have to be smart enough, quick and decisive. The round ball always fuels the dream of discovering new lands. However, on its way, the ball gets caught up in the rescue of new lands. In this version, the planet that you need to rescue has up to 5 large lands. In it, each land is ruled by a mascot. However, they are under a curse. They became ferocious monsters like never before. Now, T-Rex, Titanoboa, Quetzalcoatlus, Megatherium and Megalodon are no longer themselves. It was the result of a stranger stealing 5 polygon blocks and hiding them in secret locations. Your job is to conquer the racetracks to gain special items. Those are the magic polygons. They are the magic antidote to the 5 mascots of this planet. There is no better way to help them get back to their instincts. The lands of this planet will again be safely protected by them. Peaceful scenery will return here. Overcome the obstacles and become the true saviour of this planet!

How to control: Click the mouse left button or press the spacebar/ the up arrow key to jump.